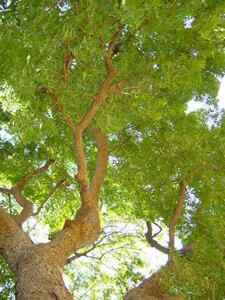 Neem (Azadirachta indica), also known as Indian Lilac, has been recognised for centuries in India for its many healing properties. Sometimes referred to as the ‘tree of marvels’ or ‘village pharmacy’, neem contains many substances with anti-inflammatory, anti-bacterial or immune-stimulating properties. The earliest medical texts in Sanskrit refer to the beneficial effects of its fruit, seeds, oil, leaves, root and bark. Each of these has been used for centuries in Ayurvedic medicine to treat a range of health problems. In addition, in parts of the world where it has been introduced more recently such as South America and tropical Africa, it has already established a solid reputation for relieving various health issues.

Nowadays, neem is recognised and used mainly for its general antiseptic qualities. Neem-based extracts have been shown to be effective against a wide range of skin diseases, wounds and infected burns. Applied as poultices or decoctions, its leaves are also recommended for boils, ulcers or eczema. Neem oil is used for skin diseases such as scrofula, indolent ulcers and herpes.

There are many other claims made for neem’s wider therapeutic benefits which have yet to be independently confirmed by controlled trials. However, these indications suggest its use may be significantly expanded in years to come.
These promising, but as yet unconfirmed, lines of research could lead to neem being used as an anti-inflammatory, or to lower blood pressure or treat ulcers.

Traditional use of neem in India

Back when the ancient Indian texts known as the Vedas were composed, neem was called “Sarva Roga Nivarini” meaning “curer of all ailments” and it is still thought of as such centuries later. The arrival of Portuguese, British and French colonists on the Indian sub-continent meant that some traditional practices, such as the use of neem to protect harvest and grain stores, were abandoned in favour of modern techniques. But the use of neem remains firmly ingrained in the Indian mindset and as well as being a treatment for various diseases, it continues to be used for toothpaste, soap, sacraments and food for millions of Indians.

The first studies on neem’s commercial potential were conducted by the Indian Institute of Sciences in Bangalore during the 1920s. Until 1933, neem cake (the pressed residue left after the oil has been extracted) was used to fertilise sugar cane crops and keep the termites away.

Mahatma Gandhi was a firm believer in the benefits of neem. He led prayer meetings at the Sabarmati Ashram under a neem tree and his daily diet included a chutney made from neem leaves.

Neem leaf extracts and neem oil have proven efficacy against fungi that infect the human body. These fungi represent a growing problem and are difficult to control with synthetic fungicides. In a laboratory study1 a neem-based preparation was shown to be effective against cultures of 14 common fungi, including those from the following genii:

- Trichophyton, the athlete’s foot fungi which affects the hair and nails;
- Epidermophyton, a ringworm-type fungus which attacks the skin and toenails;
- Microsporum, a genus of fungi that affects the hair, skin and occasionally the nails;
- Trichosporon, a gastro-intestinal fungus;
- Geotrichum, a yeast-like fungus which causes infections of the bronchi, lungs and mucous membranes;
- Candida, another yeast-like fungus which is part of normal mucosal flora but which can multiply out of control and produce lesions in the mouth, vagina and on the skin, hands and lungs.

The oil extracted from neem leaves, seeds and bark exerts a broad-spectrum anti-bacterial effect against Gram negative and Gram positive bacteria including M. tuberculosis and strains resistant to streptomycin2. In trials, it was shown to inhibit pathogenic bacteria including:

- Staphylococcus aureus3, numerous strains of which are now resistant to penicillin and other antibiotics, hence the increasing occurrence of staphylococcus infections in hospitals;
- Salmonella typhosa4, found in food and water and which cause typhoid fever as well as infections such as blood poisoning and intestinal inflammation.

In vitro, neem has been shown to inhibit bacteria such as Vibrio cholerae, Klebsiella pneumoniae, M. tuberculosis and M. pyogenes 5. More recently, neem seed oil’s anti-bacterial effect was assessed against 14 strains of pathogenic bacteria6. But like all antibiotics, neem’s anti-bacterial effects are limited and some bacteria strains will be resistant to it.

Every day, millions of people in India and Africa use twigs as toothbrushes and for many of them, those twigs will come from the neem tree. Dentists have supported this ancient practice, confirming that it is effective at preventing periodontal disease 7.

A study examined the inhibitory effects of aqueous extract of neem sticks on bacterial aggregation, growth and adhesion to hydroxyapatite, as well as on production of insoluble glucan (insoluble glucose derivatives) which may affect in vitro plaque formation. The results showed that neem extract was able to inhibit production of insoluble glucan and reduce the ability of certain streptococci to colonise tooth surfaces. 8. The efficacy of neem leaf extract against dental plaque formation was assessed among a group of 20-30 year-old males over a six-month period. The clinical study compared the efficacy of a dental gel containing neem leaf extract with that of chlorhexidine mouth wash as a control. The results of the study suggest that the neem dental gel significantly reduced the plaque index and bacterial count9.

Some of neem’s constituents have demonstrated a unique ability to absorb viruses, thus preventing them from causing infections. Neem also inhibits virus replication by interfering with the cell surface.
Pharmacological studies support the view that neem leaves may have antiviral properties. These are only preliminary, unconfirmed results but they are nonetheless interesting. In the United States, aqueous extracts of neem leaf have been shown to have a mild to moderate inhibitory effect on hepatitis B virus DNA polymerase 10. In Germany, an alcohol neem extract was shown to be effective against the herpes virus 11. The antiviral and virucide effects of a neem leaf alcohol extract have been demonstrated on the group B Coxsackie viruses12. In vitro, at a concentration of 1mg/ml, it inhibited plaque formation of various antigenic types of Coxsackie B.

The antioxidant effects of neem seed extract have been demonstrated in vivo during plant germination. In male rats in which oxidative stress was induced by a powerful liver carcinogen, pre-treatment with a neem leaf alcohol extract reduced lipid peroxidation. In another study conducted by the same research team on male albino mice, neem leaf alcohol extract reduced lipid peroxidation and stimulated antioxidant activity linked to glutathione peroxidase 13.

Neem is used to treat rheumatism and arthritis as well as other inflammatory diseases. Numerous research studies have demonstrated neem’s anti-inflammatory properties14. Others have shown that nimbidin, one of neem’s active principles extracted from its seeds, exerts a beneficial effect on arthritis and inflammation. Its anti-inflammatory effects manifest as various types of activity against acute and chronic inflammation. Neem’s powerful ability to inhibit immediate, acute inflammation suggests it prevents the release of inflammation-inducing neurochemical substances such as prostaglandins. In one study, neem leaf extract was more effective at inhibiting prostaglandins than aspirin15.

Studies have shown that neem leaf aqueous extract protected against paracetamol-induced liver necrosis in rats. Elevated levels of AST, ALT and GGT – markers of liver damage – were significantly reduced by administration of neem extract16. The anti-ulcer effect of neem leaf aqueous extract was tested in rats which were exposed to stress or fed ethanol. The extract was administered at doses of 10, 40 or 160mg of leaves per kg of body weight in one dose or in a series of five doses as a pre-treatment. The neem was shown to dose-dependently reduce both the severity of gastric ulcers in the rats subjected to stress as well as ethanol-induced lesions in the gastric mucosa. The extract seemed to prevent mastocyte degranulation and increase the amount of gastric mucus in the stressed animals, which may partly explain neem’s anti-ulcer mechanism of action 17. It has been shown in laboratory tests that neem bark aqueous extract has a powerful anti-ulcer and anti-acid secretion effect 18.

Neem leaf aqueous extract has been shown to significantly reduce blood sugar levels and prevent glucose-induced hyperglycaemia 19. Orally-administered neem leaf aqueous extract produced hypoglycaemia in healthy rats and a decrease in blood sugar in rats with experimentally-induced diabetes20.
The blood glucose-lowering effect of neem leaf extract may be explained by the present of a particular flavonoid, quercetin.

Malaria is one of the most common diseases in India and the sub-tropics. Since time immemorial it has been treated with neem leaf extract by Indian practitioners of Ayurvedic medicine. In Niger and Haiti, the disease is treated using a tisane of the dried leaves.

Research has shown that neem is toxic to malarial parasites and that it can reduce the disease’s characteristic fever. Neem leaf aqueous or alcohol extracts have been shown to be effective against the parasite P. falciparum.

Studies conducted in India have reported that constituents of an alcohol extract of neem leaf and neem seed were effective against strains of malarial parasites sensitive or resistant to chloroquine. The various extracts tested suppressed parasitic growth within 72 hours.

These results, while preliminary, suggest an interesting line of research. It should, however, be noted that while neem extracts are effective against malarial parasites, they have not been shown to prevent the development of infection in the body.

In India and south-east Asia, Ayurvedic medicine practitioners have successfully used neem to reduce tumours. Studies show neem leaf aqueous extract has an anti-cancer effect and reports have examined the use of neem extracts to treat patients suffering from various forms of cancer. 22.