menuSubjects
Welcome   >  Vitamins  >  Is everyone lacking in...

Is everyone lacking in vitamin B12? Why is there such widespread deficiency and what are the consequences? 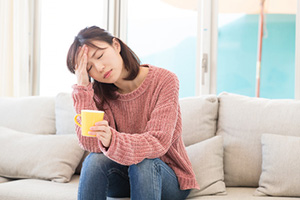 Are you often tired? Do you feel irritable and lacking in energy, even though you eat a balanced diet? It’s highly possible that you’re part of the growing number of people who are deficient in vitamin B121. And the facts behind this widespread deficiency offer no cause for optimism: half of all people over 30 may be affected, with consequences for their health which are as alarming as they are unpredictable.
Let’s take a look at the three main causes of this worrying epidemic.

Vitamin B12 intake is not what it was

Unlike many other vitamins, dietary sources of vitamin B12 are few and far between. The vitamin is found mainly in products of animal origin such as meat, fish, dairy products and eggs. It was long thought that certain plant-source foods and fungi contained vitamin B12 but we now know that while the substances these foods contain are similar, they have virtually no bioavailability and may even slow down absorption of the actual vitamin2.
But Nature provides a perfect explanation for this scarcity.
All animals produce vitamin B12 from bacteria present in their gut – humans included. Unfortunately, this production takes place mainly in the colon which is too far from the lower part of the small intestine where absorption occurs. As a result, the B12 cannot be absorbed and is excreted in faeces.

Animals have therefore developed several techniques for absorbing this valuable micronutrient: And where do humans fit in all of this? Humans are capable of adjusting to highly variable dietary situations. We have adapted to occasional consumption of meat, ie, significant but sporadic intake of vitamin B12, as well to lower but more continuous intake through our consumption of fruits and vegetables. In the past, the soil found on the peel of raw vegetables such as freshly dug up carrots contained bioavailable vitamin B12.
Humans thus developed a system through which we are able to both absorb low doses of vitamin B12, while maintaining the possibility of storing it so as to either benefit from a large influx of the vitamin, or cope with a potential shortage. The problem with this system is that it doesn’t really reflect our current environment. While most humans continue to eat meat, probably more so than in the past, they are no longer exposed to the continuous B12 intake to which the body adapted over millions of years. Nowadays, it is unthinkable to eat fruit and vegetables without first washing them: industrial farming of crops involves the use of pesticides, herbicides and insecticides which not only prevent the survival of vitamin B12-producing bacteria, but are also very harmful to our health. In fact, our environment is so degraded, so artificially-maintained, that the soil in which our food is grown no longer contains any vitamin B12.

The fall in B12 intake is not the only factor behind today’s widespread deficiency. Something else is going wrong with our use of this vitamin.
When vitamin B12 enters the digestive tract, a mechanism is initiated which makes the body able to absorb it and benefit from it. Parietal cells in the stomach walls produce a transport protein called ‘intrinsic factor’ which is responsible for transporting the vitamin to the small intestine where it can be absorbed. But this mode of transport has limitations: there are a finite number of intrinsic factor receptors which means that no more than around 1.5µg of vitamin B12 per meal can be absorbed. The remainder thus escapes these ‘control points’ and ends up being eliminated from the body via urine and faeces… A tiny percentage (around 1%) is absorbed via passive diffusion without the need for intrinsic factor but for such an amount to be beneficial, you’d need to ingest a high dose of vitamin B12 (such as that provided by offal or a highly-concentrated supplement)3.
Either way, this system of absorbing vitamin B12 is under significant threat in modern societies4. This is primarily due to Helicobacter pylori, a pathogenic bacteria that colonises the stomach and is thought to be present in half the world’s adult population. Classified as a carcinogen by the International Agency for Research on Cancer, this bacteria reduces production of intrinsic factor by damaging the gastric wall5 and disrupting the stomach’s acidity.

Unfortunately, other factors overlap with this common infection, reducing still further the production of this transport protein. Alcohol consumption, which is very harmful to the stomach wall, and certain drugs (particularly those aimed at relieving acid reflux, stress, ulcers, indigestion, diabetes and hypertension, as well as contraceptive pills) are among the major culprits. What’s more, production of intrinsic factor declines dramatically with age so it would be nothing short of a miracle for someone over 60 to have sufficient vitamin B12 without taking a supplement 6.

Our need for the vitamin is rocketing

Not content with ingesting insufficient vitamin B12, and derailing the mechanism responsible for its absorption, we humans then make matters worse by increasing our need for this vitamin as a result of unwise lifestyle choices.
The amount of oxidative stress to which we daily subject ourselves (from smoking, chronic stress, chronic inflammation, anxiety, sleep problems, pollution, toxins, poor diets, and inactivity) requires a level of vitamin B12 well above average – and we don’t even manage that. The logical outcome is that after a few years, our reserves gradually become depleted and that’s when the problems start …
Thus the causes of this epidemic of vitamin B12 deficiency - which is already affecting a large percentage of the population and looks set to spread to the rest of the planet in the coming years – are threefold: a reduction in absorbable intake, a decline in absorption and significantly-increased needs.

Why is a low B12 intake such a problem?

Though sources of vitamin B12 may well be rare in Nature, all animals nonetheless require it in order to function properly. It plays a role in a great many cellular and physiological mechanisms: cell metabolism; production of red blood cells, nerve cells, DNA and proteins; equilibrium of the nervous system; metabolism of acids… the list is so long that the mere thought of being deficient in such a vital nutrient is enough to bring on a cold sweat.
What’s more, it is so intrinsic to how the body functions that it is difficult to predict what the initial symptoms of deficiency might be. Depending on the individual, a lack of B12 can manifest over the long term in the appearance of a wide range7-8 of health problems and diseases: It’s clear then, that without adequate blood levels of vitamin B12, nothing in the body functions properly.

What is the right dose of vitamin B12? And which form should you take?

According to research conducted over recent years, hydroxocobalamine and methylcobalamine are better absorbed than other forms (cyanocobalamine, adenosylcobalamine). And as the body has adapted to low doses spread over the day, it makes sense to choose supplements that contain 1.5-2 µg (ie, the maximum amount absorbable via the intrinsic factor mechanism), or even better, to take a prolonged-release supplement such as Daily 2 (which contains 300 µg of vitamin B12 but which releases its active principles over a period of time).

However, those who are currently deficient in vitamin B12 can quickly boost their reserves by opting for supplements offering much higher single doses, for example, up to 1000 µg11 (ie 1 mg of methylcobalamine) in order to gain maximum benefit from passive diffusion. Although a large part of the vitamin will not be absorbed, this is the only way you can optimally exploit the passive diffusion mechanism. It’s also the only way that individuals with low production of intrinsic factor (in particular, older people, those infected by Helicobacter pylori and those with recurrent digestive problems) can circumvent the primary system and regain their health as quickly as possible.