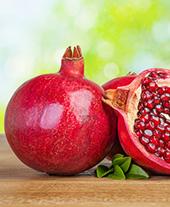 The fight against ageing continues. Researchers working for a start-up biotech company have discovered the beneficial effects of urolithin A1, a substance produced during the digestion of pomegranates, sometimes referred to as ‘the fruit of the gods’.

Urolithin A is produced when antioxidant compounds called ellagitannins – found abundantly in pomegranates - are broken down2,3. This metabolic conversion varies depending on the individual and their gut microflora: researchers found that pomegranate consumption produced more urolithin A in some people than others, though they were unable to explain why 4. In any case, it was the substance itself which interested them. They observed that in vitro, it increased the lifespan of nematode worms, with short- and long-term effects. On further investigation, they identified the mechanism responsible for this beneficial effect: urolithin A relaunches a mitochondrial clean-up process essential for good health but which declines with age. Dysfunctional mitochondria may actually play a role in the majority of degenerative diseases, and particularly in the loss of muscle mass seen in older people, itself an important risk factor for mortality5.
The next step is to examine this very promising substance for its anti-ageing effects in humans, and over time. In the meantime, we will have to be satisfied with eating fresh pomegranate or taking purified supplements (such as Double Pomegranate) to benefit from urolithin A .When you think of the pomegranate’s remarkable antioxidant potency 6 and many health virtues, this is not such a bad option … 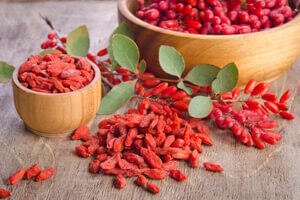 Resveratrol: astonishing new study confirms its ‘enormous...
Researchers at Exeter University have succeeded in rejuvenating senescent cells in the laboratory 1 using a molecule already known for its effects on longevity: resveratrol....
Read more
Follow us