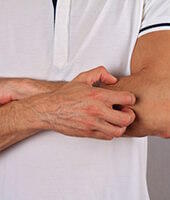 Essential for good health, vitamin D is primarily known for its vital role in mineralising the bones, joints and teeth. Its effects on the immune system, however, are often less well-known, which is why the vitamin is arousing interest among scientists in relation to the prevention and treatment of allergies and some forms of eczema. In fact, a number of studies have been conducted on the potential of vitamin D supplements to treat atopic eczema, a specific form of this skin disease. This was the subject of a detailed review published in the scientific journalNutrients1 in 2016.

Eczema is a widespread skin condition which can take a number of forms. Atopic eczema is one such common form, affecting 5%-20% of children and 1%-3% of adults worldwide2. Atopic eczema is a chronic inflammatory disease, characterised by very dry skin and inflammatory lesions. It manifests as red and scaly skin eruptions, accompanied by itching. Because the skin is fragile, it is more vulnerable to external aggressions such as bacterial infections. A number of treatments are currently available to counter the condition, including corticoid-based creams and tablets. Although these treatments reduce inflammation, they can also cause side-effects in some patients. The discovery of the benefits of vitamin D supplementation could represent a simple, risk-free alternative for treating atopic eczema.

A number of studies have shown significant improvements in atopic eczema following supplementation with vitamin D, according to a comprehensive review conducted by a team of scientists from Konkuk University in South Korea¹. The researchers collected numerous data on human serum levels of 25-hydroxy-vitamin D, the form primarily used to detect and prevent vitamin D deficiency. They found atopic eczema patients to have much lower levels of 25-hydroxy-vitamin D than healthy subjects. The average difference, for all age groups, was 2.03 ng/ml. In children, the disparity was even greater – an average of 3.03 g/ml. As a result of these findings, they decided to evaluate the effect of vitamin D supplementation on atopic eczema. Using results obtained from ‘Scoring Atopic Dermatitis (SCORAD)’ and ‘Eczema Area and Severity Index (EASI)’ to determine the degree of severity of the condition, they concluded that vitamin D supplementation may indeed reduce the gravity of atopic eczema. This review thus confirms the growing interest among scientists in vitamin D supplementation as a way of relieving the symptoms of atopic eczema.