menuSubjects
Welcome   >  Care of skin, hair and nails  >  Wrinkles: when are you...

Wrinkles: when are you going to regret not taking preventive action? 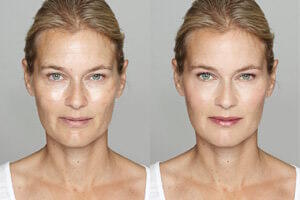 A true sign of the passing years, wrinkles are the inevitable consequence of ageing of the skin. Mrs Smith, a strong-minded woman in her fifties, discovers this to her cost when looking at an old photograph. She is shocked to see just how much she has changed in a short time. Whatever has happened? Why has she aged so much worse than her older sister? Where have all those deep grooves on her face come from? Where has she gone wrong?

Unbeknown to her, the answers to all Mrs Smith’s questions are to be found at the very heart of her cells, more specifically, in the nuclei of her skin cells which contain long strands of DNA. These well-known structures hold the information that enables the body to function as well as to repair injury, wear and tear or dysfunction of any kind. Theoretically, the smallest scratch will trigger the activation of several processes on these strands of DNA to rapidly ‘patch’ the opening in the skin and generate brand new replacement cells.
But in Mrs Smith’s case, something is amiss. Her DNA strands are in very poor condition. Quite simply, no scientist would ever be able to guess her correct age from these strands and the changes they’ve undergone. So how can the premature ageing of these cells be explained?

The unwise choices made by Mrs Smith

All DNA sequences undergo daily mutations. Molecules called Reactive Oxygen Species (ROS) are formed as a natural by-product of normal cellular metabolism, but their chemical structure has a harmful, ’oxidising’ effect on the molecules that make up DNA. Various exogenous factors such as pollution, smoking, stress and exposure to the sun can all add to the natural production of ROS. So while the normal process of burning calories results in over 10,000 lesions or ‘hits’ to DNA strands each day, smoking a pack of cigarettes a day could increase this by almost 4000.
Is it possible then that these hits are responsible for Mrs Smith’s premature ageing? It most certainly is – because they accumulate over time and damage the DNA sequences of skin cells. The greater the number of hits, the higher the risk of repair systems becoming defective. After a certain time, the skin’s mechanisms start to fail one after the other and the skin becomes wrinkled. Therefore, what Mrs Smith saw in her mirror was simply the result of 50 years’ daily bombardment. Such was the condition of her skin that the premature ageing it has suffered cannot be explained by normal processes. Several of these risk factors have probably played a part:

• Habitual use of tobacco. There’s no doubt that smoking accelerates ageing of the skin - the effects are plain to see. As an ex-smoker, Mrs Smith has long had a dull, grey complexion marked by sebum retention. Such retention has been shown in recent studies to have a precise and direct connection with premature ageing of the skin 1. In addition, the very act of smoking means you use certain facial muscles more, which over time leads to the appearance of crow’s feet.
• A diet low in antioxidants and essential fatty acids may also encourage wrinkles, as can a chronic lack of sleep, insufficient exercise, excess alcohol consumption, and the menopause, with its associated decrease in hormones 2.
• Frequent sun exposure. This more than any other factor is responsible for the development of wrinkles, potentially accounting for almost 90% of them. 3. Most at risk are those with fair skin and blond hair – Mrs Smith being a prime example! A number of studies have shown that skin colour is directly linked to propensity for wrinkles. Have you ever noticed that black people have fewer wrinkles? Their darker skin blocks the penetration of all but around 18% of UVA rays, compared with 55% in Caucasians, thus their genetic material is better protected4!
• An over-expressive face. I’m sure you’ve heard of ‘expression lines’ – well, they’re most definitely real. The more you smile, the more you make faces, the greater the risk of premature wrinkles 5,6! From as young as eight years old, you can predict what sort of facial lines you’ll have in later life from your ‘dynamic wrinkles’ 7. Environmental factors also influence the rate at which we develop lines. That’s why people with hemi-facial (one-sided) paralysis end up with far fewer wrinkles on the side of their face where the muscles are paralysed. Above all, it is a decrease in collagen, elastin and fat which is primarily responsible for wrinkles, not a lack of muscle tone. So don’t be tempted to perform facial gymnastics as they will hasten, rather than prevent, the problem!

Some people are predisposed to age prematurely

Of course, the human body has a number of defence systems in place to reduce the impact of these attacks. The best-known of these are undoubtedly antioxidants. Although some are produced by the body (endogenous), it is also vital to obtain them from dietary sources (exogenous). If we emphasise the importance of getting enough antioxidants from food or supplements, it’s because the body’s defence systems are not perfect. In fact, they have a major flaw. The information necessary for producing endogenous antioxidants is itself located on DNA strands which as we know suffer progressive damage. As the years go by, these anti-ageing systems go awry and become less effective, further accelerating damage to DNA strands.
Unfortunately, DNA strands may already carry defects even before they come under attack. Such is the case with genetic predispositions which are often inherited from a parent. For genetically-predisposed individuals, it takes fewer attacks than normal to disable their anti-ageing systems. Wrinkles, for example, will appear sooner than expected if no preventive action is taken.

You’ve probably heard of telomeres – they’re the protective caps at the end of each strand of DNA. Telomeres are involved in a process discovered several years ago which explains cellular ageing and death. A process which explains why the body eventually becomes unable to replace worn out cells with new ones. And a process which explains ageing of the skin. With each cell division, telomeres become gradually shorter, until at a critical limit, the senescence mechanism is triggered. From this point, the cell is in a critical state and can no longer copy itself. Thus each of our cells has a lifespan. Here again, Mrs Smith’s DNA sequences are telling: the telomere size is so short that her cells will reach a state of senescence well before they should. Yet again, all the indications are that Mrs Smith’s lifestyle leaves much to be desired … Indeed, a number of recent studies have shown that lifestyle, and in particular, stress levels, may play a fundamental role in telomere ageing. The greater the stress, the shorter the telomeres become 8…

What are the physical manifestations of these cumulative attacks on DNA?

The cumulative effects of these assaults on DNA sequences are highly visible and well-known to all. As we age, the epidermis (the outermost layer of the skin) becomes thinner making our veins more noticeable, particularly on the hands. In addition, collagen levels decrease, as does the ability of the stratum corneum to retain water. The skin inevitably loses some of its elasticity; in other words, it becomes less and less able to return to its original state after any kind of stretching movement. At the age of 20, Mrs Smith’s facial expressions (such as raising the eyebrows) created tiny lines which would disappear when her face was no longer expressive. Gradually, as her skin elasticity decreased, the expression lines remained in place even when her face was not animated, and they remain so today.

Could Mrs Smith have done anything to slow down this process?

The development of wrinkles is, for now, inevitable, but that doesn’t mean there’s nothing you can do to slow down the process while you wait for science to come up with a solution. If Mrs Smith had her time over again, she would certainly not make the same mistakes. She would definitely take steps to look after her DNA, her telomeres and her skin. She would undoubtedly modify her diet by eating more fruit and vegetables, she would sleep better, smoke less and take appropriate natural supplements. Perhaps she would look into the various natural products available, scrutinise the scientific research and try different compounds. She would probably follow a path such as this:

- First she would focus on collagen and elastin, both of which are recognised as essential for a healthy complexion but both of which are damaged by the sun9.
- She would learn that, contrary to popular opinion, skin dryness is not responsible for wrinkles, though it undeniably makes them more visible. Using moisturising products such as those rich in natural ceramides or hydroxyproline can temporarily puff up the skin with water and make wrinkles look less pronounced.
- She would realise thathyaluronic acid both acts as an antioxidant and supports tissue structures. She would note that it is approved by the US Food and Drug Administration Agency (FDA) for treating facial lines and skin folds.
- She would certainly be interested in Resveratrol, which has been shown to have powerful antioxidant effects in the body10, and is probably the most beneficial compound of all. Research has demonstrated that it protects skin cells (keratinocytes) from UVA-induced oxidative damage. It may even stimulate production of endogenous antioxidants – via an as yet little-understood mechanism – and may thus boost internal defences against the oxidative stress responsible for ageing 11.

And she would no doubt be delighted to learn that all these natural compounds can be found in certain formulations such as Natural Skin Formula, for maximum protection against skin ageing. And she would have no regrets.

The majority of people who choose to take a supplement to delay skin ageing are not the kind who simply refuse to grow old. Dermatologist Regis Malet admits that the primary objective of these individuals is «to reduce the gap between how they live and how they see themselves »12. And what about you - do you think it’s still possible to put the brakes on your own ageing? Or are you, like Mrs Smith, full of regrets about the poor choices you’ve made?

To fight the signs of skin ageing and improve joint health

Hydrates and softens the skin and joints from within 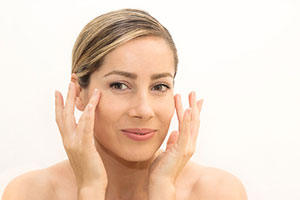 Ageing of the skin: the protective effects...
Astaxanthin is a powerful natural antioxidant which continues to attract interest. Since the publication in November 2016 of our article entitled Astaxanthin - an exceptionally...
Read more 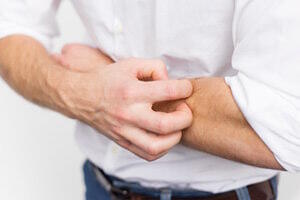 Vitamin D supplementation for treating atopic eczema
Essential for good health, vitamin D is primarily known for its vital role in mineralising the bones, joints and teeth. Its effects on the immune...
Read more
Follow us