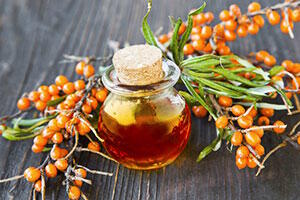 Have you heard about sea buckthorn berries? Since the beginning of the 2000s, interest in these small orange berries has been growing steadily, accompanied by a corresponding increase in their cultivation. Though their sharp flavour is not to everyone’s taste, these berries are actually more valued for their health benefits. In fact, there’s nothing new about their therapeutic virtues – sea buckthorn berries have featured in traditional Asian medicine for thousands of years. Let’s take a look at these ‘superfruits’ and find out more about their benefits for human health.

Used for thousands of years in many traditional systems of medicine, sea buckthorn berries have aroused the interest of the scientific community. A number of studies investigating the virtues of these super berries have confirmed their exceptional composition, as reflected in two articles, one published in 2012 in the journal ISRN Pharmacology1 and another in 2016 in Food Chemical Toxicology2. These two articles provide a comprehensive account of the compounds present in sea buckthorn berries. Of particular interest is their content in essential unsaturated fatty acids including omega-3, omega-6, omega-9 and omega-7, the last of which is often overlooked and difficult to obtain. Sea buckthorn berries thus represent a rare source of omega-7 fatty acids. As well as providing these hard-to-find omega-7s, these orange berries are an excellent source of vitamins such as A, B, C, E and K, as well as of phytosterols, flavonoids, carotenoids and trace elements including iron, phosphorus and magnesium. This exceptional nutritional profile is therefore responsible for these berries’ ‘superfruit’ status. Scientific studies also confirm that this remarkable composition gives sea buckthorn berries antioxidant, anti-inflammatory, cardioprotective, cytoprotective, immune-modulating, hepatoprotective, retinal-protective, radioprotective, anti-atherogenic, anti-stress and anti-microbial effects1,2,3.

Sea buckthorn berries are often highlighted for their cardioprotective effect, which may be due in part to their high content in unsaturated fatty acids. The body needs these lipids to function properly; indeed they are recognised as helping to prevent cardiovascular disease. This is why a study was conducted on the potential benefits of supplementing with sea buckthorn oil4. The researchers here were particularly interested in the effects of supplementation on cardiovascular risk factors, hypertension and systolic blood pressure. They monitored 74 patients with hypertension and hypercholesterolaemia, and 32 healthy volunteers. Subjects were divided into two groups: the first received supplements containing sea buckthorn oil, and the second sunflower oil. After 30 days’ treatment, the researchers observed beneficial effects in the first group. The sea buckthorn oil supplementation seems to have normalised blood pressure in the hypertensive patients and reduced blood levels of cholesterol, oxidised LDL and triglycerides in those with hypercholesterolaemia. It may have also improved levels of circulating antioxidants in both healthy and hypertensive subjects. At the end of their analysis, the researchers concluded that sea buckthorn oil may offer benefits in reducing dyslipidaemia, risk of cardiovascular disease and hypertension.

Alongside a cardioprotective effect, sea buckthorn berries may also help protect vision. So revealed a study published in 2016 in the renowned journal Nutrients5. This study examined specific compounds present in the berries called proanthocyanidins, also known as condensed tannins, which are believed to have a protective effect against retinal degeneration. The researchers were particularly interested in visible light-induced retinal degeneration caused by excessive exposure to light. This is responsible for significant damage to the retina and vision. In order to assess the beneficial effects of sea buckthorn berries, they administered seeds from these fruits to rabbits for 14 days before exposing the animals to light for seven days, followed by a further seven days’ supplementation. When the scientists analysed the effects of the light exposure on the rabbits’ retinas, they found that the proanthocyanidins in sea buckthorn berries had enabled retinal structure to be maintained and had mitigated the changes induced by the light exposure. They concluded that sea buckthorn berries may therefore offer benefits against retinal degeneration.

A placebo-controlled study conducted by a team of Finnish researchers, published in 2014 in the journal Maturitas6, evaluated the potential of sea buckthorn berries in treating vaginal dryness. The research team focused on vaginal atrophy, a disorder that primarily causes vaginal dryness, irritation and burning. In assessing the efficacy of supplementation with sea buckthorn oil, they monitored 98 post-menopausal women with symptoms of the disorder. The women were divided into two groups, one group receiving 3g of the sea buckthorn oil a day and the other a placebo. Prior and subsequent to three months’ treatment, the researchers measured various parameters such as vaginal health index, vaginal pH and vaginal moisture. Serum samples were also taken in order to analyse liver enzymes, C-reactive protein and circulating lipids. The analysis of these parameters revealed a beneficial effect from the sea buckthorn oil on the integrity of the vaginal epithelium. In other words, supplementation with sea buckthorn oil appears to produce favourable outcomes for vaginal dryness. According to the researchers, such supplementation could offer a natural alternative to certain oestrogen-based treatments.

It is clear that sea buckthorn berries offer numerous health benefits. In addition to their exceptional content in omega 3, 6, 7 and 9 fatty acids, these superberries have significant therapeutic potential. Already attributed with protective effects for the cardiovascular system and retina, they may also prove valuable in treating certain disorders. It’s safe to say that these little berries have more to reveal in terms of their virtues for our health! You can find sea buckthorn oil in dietary supplement form in the Supersmart catalogue: Sea Buckthorn Extract.