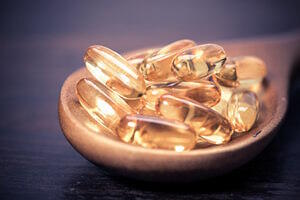 Though often overlooked, vitamin E actually plays an essential role in the body; indeed, a lack of vitamin E may be responsible for the development of certain diseases. Unfortunately, however, intake of this vitamin is very often inadequate. Such are the conclusions of several studies conducted in recent years, including one published in 2016 in the journal Archives Biochemistry Biophysics1. As a result of these worrying findings, many scientists are investigating the preventive and therapeutic benefits of vitamin E supplementation. Here we take a look at this research to understand more about this vitamin’s importance to our health.

Vitamin E, many essential roles in the body

Vitamin E is primarily known for its antioxidant potency and consequent ability to combat the harmful effects of oxidative stress. These antioxidant properties are particularly crucial for protecting against oxidation of cell membrane lipids and lipoproteins2. In addition, vitamin E is involved in a number of physiological processes which are necessary in order for the body to function properly, as described in a 2011 article in the journal Food Nutrition Bulletin3. In particular, it plays a part in immune function including the control of inflammation, in regulating gene expression and in cognitive performance. Since the body cannot produce vitamin E, it must be ingested from the diet in order to fulfil all these roles - which is why it is considered an essential vitamin. There are eight forms of vitamin E – four tocotrienols and four tocopherols – of which alpha-tocopherol is the most important to human health.

Given vitamin E’s many roles in the body, insufficient intake can have damaging effects on our health. In most cases, the shortfall is moderate and asymptomatic. However, severe vitamin E deficiency does occur and appears furthermore to often be associated with the development of certain diseases, as highlighted in a 2001 article in the journal Annales de Médecine Interne4. Severe vitamin E deficiency may be responsible for neurological problems such as cerebellar ataxia, a progressive neurological syndrome. It may also be associated with the development of lesions in the posterior region of the spinal cord. In addition to these neurological associations, vitamin E deficiency may also contribute to intestinal, hepatobiliary and pancreatic disorders. Finally, recent studies appear to support a link between a lack of vitamin E and metabolic syndrome5.

Millions could be at risk from inadequate vitamin E intake

According to recent studies on metabolic syndrome, millions of people could be deficient in vitamin E. Scientists have observed that healthy subjects have higher levels of vitamin E than those with metabolic syndrome, a condition which affects millions worldwide and is considered the scourge of the 21st century. Often linked to excess weight, it is characterised by a combination of lipid-, carbohydrate- and vascular-induced abnormalities. As these problems develop, they can lead to the onset of diseases such as diabetes, cardiovascular disease and non-alcoholic fatty liver disease (NAFLD), also known as non-alcoholic steatohepatitis. Associated with a build-up of fat in the liver, NAFLD is characterised by deterioration of this vital organ. Recent studies have revealed that vitamin E supplementation may improve the condition of the liver and prevent its deterioration in non-alcoholic steatohepatitis. A number of scientists therefore believe supplementation with vitamin E to represent a serious therapeutic response to metabolic syndrome.

In order to evaluate the therapeutic potential of vitamin E supplementation, researchers monitored its effects over four 72 hour-periods in adult volunteers, some of whom presented with metabolic syndrome. Supplementation was with a specific form of vitamin E: hexadeuterium-labelled alpha-tocopherol, each subject receiving 15mg of alpha-tocopherol alongside either fat-free, reduced-fat, whole or soya milk. Positive results were observed within the first 24 hours of supplementation. The scientists measured biomarkers of vitamin E: α-carboxyethyl hydroxychromanol (α-CEHC) and α-carboxymethylbutyl hydroxychromanol (α-CMBHC). These are catabolites of vitamin E – substances produced as a result of vitamin E degradation. Significant differences were observed between healthy subjects and those with metabolic syndrome in terms of plasma levels of these biomarkers. Metabolic syndrome subjects were found to be lacking in vitamin E, a situation which could be remedied with adequate supplementation. While further studies are required, these preliminary findings could pave the way to the development of a gentle therapeutic response to controlling metabolic syndrome. This study, published in the prestigious American Journal of Clinical Nutrition also emphasises the importance of adequate vitamin E intake for preventing the development of health complications.

In addition to identifying promising new approaches to treatment, all these studies re-emphasise the essential role played by vitamin E in maintaining good health. Too often overlooked, this vitamin is involved in many functions within the body. The risk of vitamin E deficiency is therefore not something to be taken lightly.

Beneficial for cardiovascular health. 90% delta-tocotrienols, the most biologically active form of vitamin E.