Our food has never been so lacking in nutrients 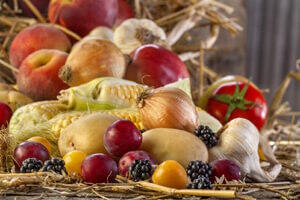 Do you get the impression that fruit and vegetables are somewhat insipid compared with years ago? That meat just doesn’t taste as good? And that micronutrients have been insidiously replaced by pesticides, affecting the alchemy of natural foodstuffs? Well you don’t need to apologise for being a reactionary – you’re right. And what’s more, you have no idea the extent to which this has happened.

Since the start of the 20th century, there has been a real decline in nutrition

The agricultural landscape has undergone significant changes over the last century. So too have our supermarket shelves: today it’s not uncommon to find aubergines that are round and ribbed, apples that are shiny and red and tomatoes in all shapes and colours … Yet these modern fruits and vegetables have limited appeal They taste bland and you suspect they may even be lacking in certain nutrients. In recent years, two teams of scientists have been working to establish whether this is indeed the case1, 2. The first group, based in Texas, studied the nutrient and micronutrient content of 43 different vegetables, comparing data from 1950 with that from 1999. The results were clear : calcium, iron, vitamin B2, vitamin C and protein had all “ declined significantly ” since 1950. Chief among the culprits has been the drive to come up with new varieties that grow faster, are ever more resistant to pesticides and are more adaptable to different climates and soil depletion. Unfortunately, those behind such moves see little financial interest in ensuring that these varieties are able to produce and accumulate nutrients. The second research team corroborated these findings, putting a figure on the decline of 20% to 40 % on average
The picture for animal-source foods is no better. Meat, eggs and dairy products from pasture-raised animals have considerably higher levels of vitamins (A, D, and E in particular) than those from intensively-farmed livestock. Their omega 6/omega 3 ratio is also more in line with our needs. Unfortunately, intensive farming continues to thrive, driven by consumer demand which places price above quality when it comes to food …

But this decline is no modern-day phenomenon: the true history of agriculture

The history of humans and their diet is in reality a tale ofsuccessive decline . Allow me to share with you the first such example which marked the transition from the Palaeolithic age, when humans were exclusively hunter-gatherers, to the Neolithic period when they began to cultivate crops and rear livestock. You will understand why the shift towards a sedentary existence has been such a grave error of judgement.

For millions of years, man subsisted by gathering plants and occasionally hunting animals. At that time, man was an omnivorous hominid, living a nomadic life in small groups of 10 or so individuals, and eating an extremely varied diet. Huge amounts of energy were expended gathering fruits and vegetables from hard-to-reach sources, hunting agile, wily animals, covering vast expanses, escaping predators, etc. Such activity required a high calorie intake in order to satisfy energy needs. While today’s adults require an average calorie intake of between 1600 and 3000 a day, that of our hunter-gatherer predecessors was significantly higher3.

This was, in fact, perfectly achievable; strange as it may seem, Palaeolithic man’s foraging provided a varied, abundant diet. This meant that humans at that time benefited from anexceptional intake of micronutrients, and as a result, optimal physiological function. And contrary to what you might think, septuagenarians were by no means rare during this period4 (infant mortality was very high due to lack of medical knowledge but once past the age of 20, life expectancy was good).

What happened after the Neolithic agricultural revolution?

Little by little, our New Stone Age ancestors started to believe they could unlock the secrets of Nature: they decided to exchange their nomadic existence for settlement and devote their time to selectively cultivating a much smaller number of plants (cereal grasses such as wheat, rice, corn) … in the hope of improving their lives. They no doubt reasoned: “If we can manage to build up reserves of food, we won’t have to hunt the whole day in order to feed ourselves”. They were right. Their food resources grew rapidly, eliminating the need to traverse long distances in order to find nourishment. Their lives were nonetheless far from easy: although their energy output fell, it remained far in excess of today’s levels. However, the form their activity took changed radically: the previous running, climbing and endurance was replaced by having to crouch or squat (with heavy sacks on their backs the whole day) – a posture which when adopted for long periods is anything but natural for humans

In short, this change led to:

- A significant fall in caloric expenditure. Thus a reduction in the number of micronutrients ingested.
- A decrease in the variety of foods consumed. Thus a decline in the overall quality of nutrients.
- The adoption of unnatural positions and postures. Thus excessive demands on muscles and joints incompatible with the human condition.

At the same time, degenerative diseases such as arthritis began to appear. Mere coincidence?

So why did they carry on with this way of life, I hear you ask? The reality is, they had no choice: the trapdoor closed behind them. In deciding to switch to cultivation, they increased the amount of available food resources. The size of the population had previously been controlled by the adequate but limited resources provided by Nature. Farming and the ability to store food led to a sharp increase in the birth rate which was no longer constrained by finite food resources.
So you can see how this ‘revolution’ enabled a greater number of people to be kept alive, but in inferior conditions . And once the movement had begun, nothing could stop it. The greater the population, the more mouths there were to feed, making it impossible to return to the hunter-gatherer existence without significant sacrifice.

Slowly but surely, the decline has got worse

Over time, humans have improved their ability to control and make use of more and more living species, but there has been no such improvements in dietary intake. Energy output has decreased further, necessitating an actual reduction in food intake. The storing of foodstuffs and international trade in food continue to grow. Whereas in the past, plant-source foods were consumed within minutes of being picked, they are now kept in storehouses, or travel thousands of kilometres before being eaten. And we know, of course, that the fresher the food, the more nutritious it is. A fruit or vegetable’s vitamin and mineral content starts to diminish the moment it is harvested. So there is no point buying large amounts of fresh products if you are not going to eat them within two or three days. Or buying ‘fresh’ fruit which has been grown on the other side of the world.
Nowadays, we are consuming less and less fresh food. We are opting for tinned food where precious minerals escape into the brine, the saltwater solution which enables food to be preserved for longer. Part of the salt also seeps into the food itself which is why people with heart disease or high blood pressure are advised to avoid tinned food 6. When it comes to vitamins, heat treatment destroys up to 30%-50 %7. And while antioxidants vary in terms of their preservation, the process of blanching appears to cause some degree of loss8 (beetroot loses around 64% of antioxidants, peas 46%, spinach 32%, beans 29%, asparagus 25% and green beans 13%).
We’re also buyingfrozen products. The pre-freezing stage of blanching in boiling water often results in the loss of micronutrients (around 35% of the vitamin C in broccoli, for example)9.

Cooking is also a factor. It’s a practice so ingrained in the collective unconscious, it’s hard to think of it as anything other than beneficial for humans. And it does indeed destroy microorganisms responsible for a number of diseases. But the fact is that, more often than not, it reduces the nutrient content of plant-based foods . Boiling leafy vegetables, for example, results in 63% of potassium, 43% of magnesium and 30% of vitamin C being lost10, 11. And the longer the cooking time and the higher the temperature, the greater the loss of nutrients. This is not generally the case with meat – cooking actually increases the majority of its minerals and nutrients (particularly proteins and fats) 12.

The advent of ‘empty calories’: yet further decline

Nowadays, not only is our food less nutritious due to intensive farming, storing and cooking, but it increasingly contains unnecessary and even harmful substances (additives, trans fatty acids, preservatives and refined sugars) which are often empty calories, replacing those which could be providing the body with beneficial nutrients.

We should hardly be surprised then to find there are widespread vitamin deficiencies among the population (see the shocking summary at the foot of this article) 13-15. Why, given the known ability of several vitamins to protect against diabetes, headaches, cancer and cardiovascular disease, are we prepared to accept minimum recommended intakes? In order to bridge the huge gap between current vitamin intake and that of our ancestors, many individuals are readily making the leap to multivitamin supplementation. In 2006, a study revealed that almost
Order the nutrients mentioned in this article