Air pollution: the benefits of combining vitamin E and omega-3 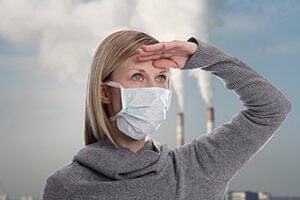 As we discussed in May of this year, peaks in air pollution are on the increase. In 2014, the World Health Organisation estimated that at least 90% of the global population was living in a polluted environment - an area where WHO air quality guidelines levels were not being met1. So what would scientists conclude today, in 2017? Much to the consternation of researchers who have been concentrating their efforts on reducing levels of air pollution, we’ve seen a clear increase in these levels over the past few years. It is in this worrying context that scientists have just made a promising discovery in relation to health protection. Below we explore their encouraging findings.

Air pollution exposes the body to particles, often described as particulates or micro-particles because of their miniscule size. However, despite their microscopic proportions, these particulates are known to damage our health and increase the risk of cardiovascular and respiratory diseases1. In an effort to combat the harmful effects of these particulates, scientists evaluated the benefits of combined supplementation with vitamin E and omega 3². Extensively studied in recent years, these molecules are recognised for their preventive and therapeutic effects. Vitamin E is a powerful antioxidant which combats damage caused by the reactive species free radicals, production of which can be induced by exposure to particulates. Omega-3 fatty acids are also known for their protective effects, particularly in preventing cardiovascular disease.

Based on the known protective effects of vitamin E and omega-3, the researchers decided to measure the benefits of supplementation with these nutrients. They carried out a number of tests on four groups of rats:- To measure the protective effects of these supplements, the four groups were exposed to an identical quantity of particulates. The researchers then evaluated various parameters including: And the result? These various analyses revealed positive outcomes for supplementation against the harmful effects of these particulates. Compared with controls, the three supplemented groups exhibited less heart damage, increased antioxidant activity and less inflammation. These benefits were even greater in the rats that received both vitamin E and omega-3.

Combatting chronic constipation and maintaining a healthy...
Louis XIV famously suffered from severe constipation and his doctors would regularly ask him: ”Comment allez-vous (How are you)?”, when what they actually meant was:...
Read more
Follow us