Nutrition: how to keep your brain well-nourished 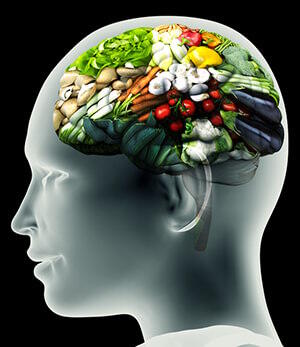 As the control centre of the central nervous system, the brain has to deal with a constant flow of data, processing millions of bytes of information a day. This vital organ enables us to carry out innumerable actions, both manual and intellectual. Referred to scientifically as cognitive abilities or functions, these are categorised as: memory, attention, language, visual-spatial and executive, but unfortunately, they all diminish with age1,2. To prevent such cognitive decline, we are often advised to engage every day in mentally-stimulating activity (‘use it or lose it’) and to nourish our brains well. A number of studies have indeed demonstrated a direct link between food intake and brain health. Eating a balanced diet is, of course, essential, but prioritising certain nutrients may also support our mental capacities and combat cognitive decline. Drawing on an article published in 2016 in the journal Annals of the New York Academy of Science3., we explore here a selection of nutrients that have been shown to benefit the brain.

Benefits of omega-3 for brain health
Well-known for their positive effects on the cardiovascular system, omega-3 fatty acids also offer significant benefits for brain health. Several studies have shown adequate intake of omega-3 to be associated with a protective effect on cognitive function. Scientists believe omega-3 could help limit cognitive decline and reduce incidence of Alzheimer’s disease. This hypothesis is well-supported by blood tests demonstrating lower plasma and tissue levels of omega-3 in dementia patients compared with healthy subjects of the same age.

Optimal intake of omega-3 for cognitive function
Given the many health benefits of omega-3s, scientists have looked at the presence of these fatty acids in the diet. Fish are a well-known source of omega-3, with oily fish like salmon and herring the richest sources. Omega-3s are also present in the seeds of certain plants such as rapeseed and linseed, as well as in nuts.
Despite the availability of these various omega-3 rich foods, many of the world’s populations do not consume an adequate amount of these fatty acids. For example, data produced by the National Health and Nutrition Examination Survey (NHANES), conducted between 2003 and 2004, showed that many Americans are lacking in omega-34. Analysis of the survey’s results revealed that more than 80% of the adults questioned had omega-3 levels lower than those recommended for good cardiovascular health. As a result of such widespread inadequacy, omega-3 dietary supplements have been developed to ensure an optimal intake and so deliver the benefits of these fatty acids to the cardiovascular system and brain. One such product for nourishing the brain is Super Omega 3 available from Supersmart. It is formulated from eicosapentaenoic acid (EPA) and docosahexaenoic acid (DHA), two omega-3 fatty acids recognised for their therapeutic virtues.

Beneficial effects of vitamins for the brain

Essential role played by B vitamins in the nervous system
A number of vitamins from the B vitamin complex are known for their role in the nervous system. Vitamin B9 or folic acid, for example, acts as a substrate in the conversion of homocysteine to methionine. Its role in this chemical reaction contributes to the synthesis of S-adenosylmethionine, a molecule essential for the methylation of DNA. As a result of this synthesis, vitamin B9 modulates the expression of certain genes and prevents accumulation of the amino acid homocysteine which is associated with the development of cardiovascular and cognitive problems. Involved in the same metabolic pathway as vitamin B9, vitamin B12 is also known for its neuroprotective effects. It is involved in protecting the myelin sheath surrounding nerve fibres. Though perhaps less well-known than its B vitamin counterparts, B6 also helps maintain neurological function. Indeed, it is necessary for the production of neurotransmitters, molecules which ensure the transmission of nerve signals.
Although these three B vitamins are vital for the nervous system, significant levels of deficiency have been reported in recent years. A lack of B vitamins may be principally due to insufficient intake and problems in absorbing these molecules. To prevent deficiency and ensure an optimal intake, dietary supplements are now available offering forms of these vitamins with excellent bioavailability. Featured in the Supersmart catalogue, such products include a natural form of vitamin B6 called (Pyridoxamine), a bioavailable form of vitamin B9 called (SuperFolate) and an active form of vitamin B12 called (Methylcobalamine).

The little-known role of vitamin D in neurological function
Though perhaps best-known for its essential role in maintaining healthy bones, vitamin D actually offers many other benefits to human health. Recent studies have identified vitamin D receptors in various regions of the body, particularly the nervous system. According to scientists focusing on vitamin D’s role in neurological function, it may be involved in the expression of neurotrophins, molecules essential for the development of neurons. Other researchers have demonstrated a role for vitamin D in several neural cell metabolic pathways. Further studies have established an association between vitamin D deficiency and the development of metabolic problems. Low levels of the vitamin have been linked to the onset of cardiovascular problems and symptoms of dementia. This vitamin thus appears to play a key role in combatting cognitive decline. Supplementation with vitamin D may therefore help maintain cognitive function, particularly in those who are vitamin D-deficient, or at risk of becoming deficient, such as the elderly.

Anti-ageing effects of vitamin E on cognitive function
As discussed in our article on the importance of vitamin E for the body, this vitamin offers multiple protective effects as a result of its antioxidant potency which fights free radical damage and thus helps prevent premature ageing. These anti-ageing effects have made vitamin E the subject of a number of ongoing studies which are examining its role in maintaining cognitive function. While scientific data on the subject remains limited, several research teams have published positive results. For instance, adequate intake of alpha-tocopherol, the most abundant form of vitamin E in the body, may slow down cognitive decline. Other forms have also been studied, such as the tocotrienols, intake of which has been linked to a decreased risk of cognitive impairment in elderly subjects. Supplementing with vitamin E may therefore prove particularly beneficial for fighting age-related cognitive decline. To obtain maximum benefit from all the different forms of vitamin E, the formulation Gamma E Tocopherols, which contains the four tocopherols, should be combined with Annatto Tocotrienols, which is naturally rich in the tocotrienol forms.

In order to maintain cognitive function, the brain must be properly nourished. Recognised for their multiple health benefits, omega-3 fatty acids and vitamins actively contribute to brain health. Many studies have shown that an optimal intake of these nutrients helps to preserve cognitive function and fight age-related cognitive decline.

Beneficial for cardiovascular health. 90% delta-tocotrienols, the most biologically active form of vitamin E.

Vitamin C: was Linus Pauling right?
Would you put your faith in a man who was twice awarded the Nobel Prize in two different categories? One of only two people (the...
Read more
Follow us