Bacopa monnieri, a plant for stimulating the brain 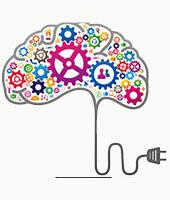 Often overlooked, the plant Bacopa monnieri is highly-regarded in India because of its many health virtues. In Ayurvedic medicine, it is regarded as a natural tonic for conditions affecting the brain. Widely-studied in recent years, this plant is now considered an adaptogen, a natural aid to combatting stress and anxiety. More recently, it has come to be thought of as a powerful, natural nootropic by some scientists, capable of improving cognitive ability including memory and concentration. Here we shine a light on the brain-stimulating effects of Bacopa monnieri.

While Bacopa monnieri has been used in India for thousands of years as a natural tonic, some of its effects in the body remained unclear. In 2016, a new article on this plant was published in the journal Pharmacognosy Magazine1. The article’s authors began by recalling the many health benefits attributed to Bacopa Monnieri which include antioxidant, anti-ulcer, adaptogen and liver-protective effects. However, it was its natural nootropic activity which most interested these researchers. In order to confirm the plant’s brain-stimulating benefits, they tested the effects of a Bacopa monnieri extract on molecules and cells known for their role in memory and cognition. Producing very positive results, their study identified a number of effects for Bacopa Monnieri on the cholinergic, dopaminergic, and serotonergic systems, as well as neuroprotective benefits.

This new study highlighted several mechanisms of action for Bacopa monnieri within the body. According to the researchers, some of the plant’s active compounds may have an antagonist effect on the serotonin receptors 5HT2a and 5HT6, known to be involved in memorisation processes. Thus this antagonist effect is one way in which Bacopa monnieri may be able to improve memory. In addition, it has other potential benefits for memory as a result of the inhibitory effects of certain of its compounds. The extract used in the study was shown to inhibit enzymes such as Catechol-O-methyl transferase (COMT) and Prolyl endopeptidase (PEP). The first of these is involved in modulating memorisation by influencing dopamine metabolism. The second, PEP, is known for its neuropeptidase activity which is involved in cognitive decline. It degrades neuropeptides such as arginine-vasopressin, oxytocin, neurotensin and substance-P that play a key role in positive reinforcement, social interactions, emotions and stress responsivity. By inhibiting the activity of the PEP enzyme, Bacopa monnieri extract may thus have a positive effect on cognitive ability including a preventive effect against cognitive decline.

This new study on Bacopa monnieri is further evidence of the growing interest in this ‘miracle’ plant, considered to be both a beneficial, stress-fighting adaptogen, and a natural nootropic for enhancing cognitive function. The researchers behind this study have also provided further scientific proof of the efficacy and therapeutic potential of bacosides, the primary active compounds inBacopa monnieri. This is why dietary supplements are available to buy that are formulated from an extract of Bacopa monnieri standardised in bacosides. One such product is Supersmart’s « Bacopa monnieri - 100 mg » which offers a high quality extract, standardised to provide at least 50% bacosides per capsule – one of the highest potencies available.