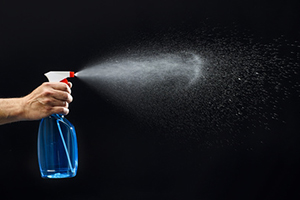 Scientists analysed the gut flora of 757 babies aged 3-4 months alongside their exposure to disinfectants (multi-surface cleaners), detergents and eco-friendly cleaning products. Their findings make uncomfortable reading: the more frequently household disinfectants were used in the home, the greater the disruption to the babies’ gut microbiota. In these infants, numbers of beneficial Haemophilus and Clostridium bacteria were significantly lower, and those of the pathogenic genus Lachnospiraceae markedly higher. Previous studies conducted on piglets exposed to disinfectant sprays had demonstrated similar changes. This imbalance in microbiota was not, however, seen in babies exposed to eco-friendly cleaning products.

Is this deterioration in gut flora likely to impact the future health of these babies?

That’s what the researchers wanted to find out. Since the potential consequences of impaired gut flora are many, they chose to focus on its effect on excess weight by measuring the babies’ BMI up to the age of three years. As might have been feared, they found a strong association between disruption to microbiota in early infancy and being overweight a few years later. This predisposition to obesity may be linked to levels of Lachnospiraceae bacteria which are stimulated by cleaning products. To confirm these preliminary findings, the researchers are now calling for further studies to examine the offending components in these household cleaning products.

“We found that infants living in households where disinfectants were used weekly were twice as likely to have higher levels of pathogenic microbes in their gut at the age of four months. And at the age of three years, they were more likely to have a higher BMI than children not as heavily exposed”, said Anita Kozyrskyj, a paediatrics professor at the University of Alberta and lead researcher on the SyMBIOTA project which is looking at how alteration of the infant microbiota affects health.

In actual fact, early disruption to the microbiome of very young babies is likely to be quite a serious issue. A study published at the beginning of 2018 showed that changes in the mother’s gut flora significantly increased the risk of neurological development problems in her child, including autism. And the microbial diversity of millions of babies may be greatly-diminished simply because so many parents mistakenly believe they their offspring should be protected as much as possible from microbes. The truth is that normal maturation of these babies’ immune systems is dependent on their immune cells coming into contact with these bacteria. During this period, microbes – be they beneficial, pathogenic or neutral – skilfully instruct the immune system on how to recognise intruders, when to tolerate them and when to reject them. In the course of this training, immune cells learn how to respond appropriately – assessing their reactions and controlling their impulses. Those individuals deprived of such immune-training may go on to experience various immunity-related problems such as allergies, asthma, eczema, or worse still, auto-immune diseases such as Raynaud’s syndrome or lupus …

How can you restore gut flora balance as an adult?

If these household products upset children’s microbiota, there’s no reason why they wouldn’t have the same effect in adults too. Along with antibiotics, hand sanitisers and pesticides, detergents are harmful to the beneficial bacteria that populate our digestive tract, weakening them and increasing the likelihood of a pathogenic group of bacteria taking their place. Over the long-term, gut flora as a whole become unbalanced resulting in what are now well-established effects:

All these problems also arise when we eat a meal that’s too low in fibre, the dietary component that passes through the stomach without being broken down by enzymes. Fibre is essential to the survival of health-friendly bacteria yet it features less and less in modern diets. Indeed, it’s not entirely impossible that in the future, the most beneficial bacteria will disappear altogether, and our microbiota will bear no resemblance to that of our distant ancestors.

The steps necessary for preventing such a disastrous scenario, at least on an individual level, are becoming increasingly well-recognised:

1) Gradually increase your consumption of dietary fibre. It’s found in almost all fruits and vegetables, pulses, nuts, seeds and wholegrain cereals. Add wheat bran or oat bran to your dishes, linseed or chia seed to your yogurts, cooked pulses to your soups, and nuts and dried fruit to your cereal … the options are endless!
The gradual element is important: if you eat too much fibre while your gut flora is too low in bacteria that can break it down, you risk suffering digestive discomfort – nothing serious but potentially troublesome nonetheless. You should aim to be consuming 80g of fibre a day after three months, always ensuring you drink plenty of water throughout the day.
Alternatively, fibre can be obtained from dietary supplements such as Psyllium Seed Husk or Organic-Acacia

2) Take probiotics at the same time as increasing your fibre intake. Probiotics are bacteria which do not colonise the digestive tract themselves but help friendly bacteria to do so. They are found in certain foods and their effects are temporary. Each strain helps to combat bacteria which in theory have no place in the digestive system. It’s generally advisable to take probiotics for a month, while simultaneously adding dietary fibre gradually to your meals. Probiotics should ideally be in the form of gastro-resistant capsules, where they’re protected from stomach acids and thus survive as far as the intestines. One such supplement is Probio Forte™ (Lactobacillus acidophilus, Lactobacillus casei, Lactobacillus plantarum, Lactobacillus lactis)