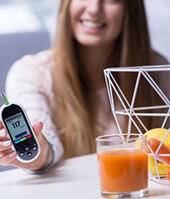 Chinese scientists may have made a major discovery in relation to the treatment of diabetes. Initial conclusions from their research appear to confirm the benefits of omega-3 supplementation for treating certain cases of diabetes. The results of their study are all the more encouraging given that this chronic disease has become a genuine public health issue, affecting more and more people each year. The World Health Organisation (WHO) estimates that incidence has quadrupled in 30 years1. While an increasing number of studies has led to a better understanding of the disease’s causes and complications, the discovery made by these Chinese researchers could open up promising new perspectives for controlling type 1 diabetes.

Extensive research has confirmed the existence of two main forms of diabetes – type 1 and type 2. This Chinese study, published in 2017 in The Journal of Clinical Investigation2, focused on type 1. Formerly known as insulin-dependent or juvenile diabetes, type 1 diabetes is a polygenic, organ-specific, autoimmune disease - in other words, a disease in which specific immune cells in the body attack healthy cells. The latter are in fact beta cells in the islets of Langerhans, known for their role in producing insulin, a molecule central to the regulation of glycaemia (blood glucose levels). In type 1 diabetes, insulin is unable to perform this regulatory role. This leads to glycaemic imbalances which can result in health complications, particularly for the cardiovascular system. To compensate for this impaired insulin production, type 1 diabetics must regularly inject themselves with insulin. Alternative, more convenient therapies have yet to emerge, but this Chinese research suggests that supplementing with omega-3 could have positive effects for type 1 diabetics.

Omega-3 fatty acids are primarily known for their positive effects on the cardiovascular system, but they also offer additional health benefits. Long-term supplementation may reduce or suppress certain inflammatory processes such as those that occur in type 1 diabetes, which is why this Chinese team decided to evaluate the efficacy of such supplementation in non-obese mice with type 1 diabetes. At the end of their study, the effects on the mice were shown to be very encouraging, with the researchers observing:

- a reduction in incidence of type 1 diabetes;
- modulation of differentiation of auxiliary and regulatory T lymphocytes including those involved in the auto-immune responses characteristic of type 1 diabetes;
- a fall in levels of IFN-γ, IL-17, IL-6, and TNF-α - molecules involved in the immune response;
- normalisation of glucose and insulin levels for at least 182 days.

While further research is needed to confirm these initial results, this study’s findings open up promising new perspectives for the control of type 1 diabetes. This new data also confirms the therapeutic potential of omega-3s. Present in certain foods, these fatty acids are also available in dietary supplement form to ensure an optimal intake. One such product is Super Omega 3, which offers a natural concentrate of two omega 3 fatty acids: eicosapentaenoic acid (EPA) and docosahexaenoic acid (DHA).