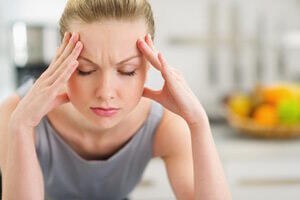 Headaches remain an enigma that continue to baffle those attempting to unlock their secrets. Interpreted by ancient peoples as some kind of mystical possession 1, headaches have existed throughout history, giving rise to hundreds of theories and treatments - as alarming as they are ineffective. Even today, scientists struggle to understand the mechanisms behind this affliction which affects 1.5 billion people worldwide. But that could be about to change2 thanks to a study published last June in Headache: The Journal of Head and Face Pain According to this report, the majority of headache sufferers are seriously deficient in certain vitamins… Hang in there, migraine sufferers, it’s worth the effort!

Suffer from headaches in the 20th century? Count yourself lucky.

Before we come back to this important discovery, let’s take a moment to look back in time and appreciate how ‘fortunate’ you are to be suffering from headaches in this day and age. Even if current treatments are not always perfect (as those who suffer from migraines would attest), they are at least relatively safe. The same cannot be said for therapies used in centuries gone by. Around a thousand years ago, headaches were seen as signalling a demonic presence. . If magic spells failed to provide relief to the sufferer, a different solution was applied: a hole would be drilled into the skull to release the evil spirit. This highly dangerous operation known as trepanation went in and out of favour over the years and it was only at the end of the 20th century that its use died out completely 4. It’s thought that the intense pain from the operation short-circuited the pain of the migraines which would then disappear … temporarily. Later on, from Antiquity until the Middle Ages, blood-lettingandscarification of the scalp were the favoured methods for “curing” migraines, which were by then acknowledged as diseases5. The principle was simple: they would cut a vein or artery in the forehead on the opposite side to where the pain was. Dome-shaped suction cups designed to restore the balance of humours in the body then took over until the Renaissance. At the end of the 19th century, it was the turn of electric shocks6, 7to have their moment of glory before they were replaced by psychological interventions, such ashypnosis. It was thought that headaches were definitely associated with an unstable psychological situation or an event that had happened in childhood (which in fact was only the case for a small proportion of headaches).

Why this discovery is important

After dental caries, headaches are the most common health problem 10 - whether tension headaches or migraines. Between 20% and 37% of the population suffer from headaches several times a month, 10% several times a week and 3% have a chronic problem11. All in all, almost 80% of the population will be seriously affected by headaches at some point. Unlike degenerative diseases or cancer, incidence of headache does not increase with age. Everyone is susceptible, children12 and adults alike.
As a result, headaches seem trivial and commonplace. Yet the majority of people who get them don’t know whether they are suffering from tension headaches or migraines. Most sufferers are unable to relieve their pain effectively and most learn to live with this chronic condition their whole lives - with personal and professional consequences.
That’s why any discovery related to headaches represents something of a victory, all the more so if it can help thousands of sufferers.

Migraines and tension headaches: which do you suffer from?

Do you get headaches regularly? Are you a migraine sufferer without realising it, like half those affected? To find out, you first need to learn the difference between a migraine and a tension headache.
Tension headaches are by far and away the most common, manifesting as acute, and often diffuse, tension in the cranial cavity. Frequently linked to stress, lack of sleep, hunger, intervertebral dysfunction, or abuse of alcohol, they can last anything from 30 minutes to several hours, and even days. Tension headaches include, for example, Hogwart’s headache, caused by excessive reading. They are usually temporary and easily preventable.
Migraines on the other hand, produce an intense, stabbing headache often on one side of the head only, close to the eye. The pain is like a throbbing in the skull and is typically aggravated by light, physical activity and noise. It’s sometimes preceded by a warning sign called an ‘aura’, 20-40 minutes before the migraine starts: this can take the form of temporarily disturbed vision, bright lights, facial numbness, and speech difficulties … Every migraine attack is associated with a number of symptoms such as nausea, shakiness, feeling cold or problems with vision. It’s important to state that the pain goes away completely between episodes, and frequency varies from one individual to another.

How can headaches be prevented?

The causes of tension headaches and migraine are still poorly understood. However, we do know there are certain triggers (see below for a list of all the scientifically-identified factors that promote headache).
Unfortunately, we don’t know why some people suffer from tension headaches and migraine while others never get them, even when exposed to the same triggers. It remains a mystery, even if this latest study adds to the body of knowledge. We also know that migraine has a strong genetic component. That’s why there are whole families of migraine sufferers and it may also explain why three times as many women suffer as men. Below is a list of factors likely to trigger migraines or tension headaches:

- Alcohol, especially excessive drinking.
- Certain foods including chocolate, yogurt, strong cheese, garlic, some fruits (primarily bananas, grapes and pineapples), fried food and smoked meat.
- Irregular meals or sleep patterns.
- Lack of caffeine (leaving it too late to have a morning coffee, for example).
- Emotions such as anger, depressed mood, anxiety and stress (with episodes triggered after periods of stress, in particular).
- Changes in temperature or pressure.
- Drugs such as analgesics (paradoxically), the contraceptive pill and statins.
- Long car, aeroplane or train journeys.
- Deficiency in coenzyme Q10, vitamin D and magnesium

Judging from a number of scientific studies, migraine sufferers would be well-advised to adopt alow-fat diet16, 17and to keep a food journal in order to identify trigger foods18. As soon as a particular food is suspected of triggering an attack, it should be banned for a few weeks, in order to note the effects. Though more difficult to follow, a vegan diet may also be a good idea 19. High consumption of fruit and vegetables20.

Moderation when it comes to alcohol consumption is an obvious course of action but the choice of drink may also be important, since mixing alcohol, and drinking red wine are consistent triggers 22.

And finally, the new discovery, that a lack of certain vitamins, particularly vitamin D and coenzyme Q10, may be associated with headache. The AHS study published in June 2016 suggests that over half of migraine sufferers may be seriously deficient in these two vitamins (women lacking coenzyme Q10 in particular, and men vitamin D).

What is coenzyme Q10 and where is it found?

A close relative of vitamin K, Coenzyme Q10 behaves like a vitamin in the body and has been shown to be essential for a large number of physiological processes. In theory, the body produces sufficient amounts; intake from the diet represents just a tiny proportion of the body’s levels. However, in people suffering from headaches, seriously inadequate levels of coenzyme Q10 have been reported. Given that intake from the diet is negligible, supplementation is recommended for this group of individuals. As CoQ10 is considered very safe 23, it is widely available for purchase. But you need to choose your supplement carefully. Studies show that a lipid-based delivery system provides three times the absorption. Therefore, to guarantee maximum bioavailability (and to make sure you’re not throwing your money down the drain!) it is crucial to buy this vitamin in a liposoluble form as is the case with that available on the Supersmart website.

As mentioned, the AHS study also identified deficiencies in vitamin D among migraine sufferers. This is quite worrying when you consider that several researchers believe the recommended level (which is used to calculate deficiency) is itself too low. Some, including the French Académie de Médecine, are calling for this amount to be quadrupled 24! As a consequence, and because of vitamin D’s multiple, scientifically-demonstrated benefits, many people have decided to supplement with vitamin D. The safety of such a practice being well-established 25, individuals who regularly suffer with headaches would be well advised to seriously consider this option …

This new study is another step towards understanding the ‘headache phenomenon’ but there is still a long road ahead. A great many people will continue having to treat their splitting headache with a dose of ibuprofen (the most commonly-recommended painkiller). But be aware that regular use of analgesic drugs may impair the body’s ownnatural production of analgesics and set off a vicious cycle 26 (‘rebound headaches’ for example). Opt instead for a treatment geared towards relaxation, physical therapies such as yoga, osteopathy or acupuncture, which are more effective in the long term27. And it goes without saying, prevention is best!

An innovative new form of magnesium with exceptional brain-regenerating capacity