The untold virtues of mushrooms 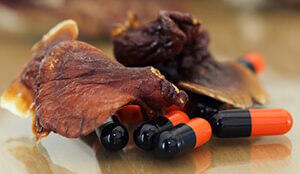 140,000 – that’s the number of different mushrooms thought to exist in the world. 1. Yet only 10% are currently known and defined by the scientific community. Certain mushrooms stand out because of their particular flavour, and are much prized in the culinary world, while others have been valued for centuries for their therapeutic effects. Indeed, several types of mushroom are recommended in traditional Asian medicine for their wide-ranging health benefits. They are believed to have a number of positive effects within the body, including antioxidant, anti-tumour, anti-viral, anti-cancer, anti-inflammatory, anti-microbial, anti-diabetic and immune-modulatory effects 2. Hence the increasing number of studies being conducted on mushrooms and the preventive and curative potential of supplementing with mushroom extracts. To better understand the current buzz around these health-enhancing fungi, let’s take a look at some key discoveries.

As well as having a distinctive taste, mushrooms have a unique composition which gives them significant nutritional benefits. While these vary depending on the species, mushrooms are in general an excellent source of certain nutrients essential to good health. In addition to providing dietary fibre, minerals and vitamins, they contain several bioactive compounds – specific polysaccharides which are responsible for the health properties of these fungi. Polysaccharides are polymers of sugar molecules which have a beneficial effect within the body. The best-known is the β-glucan (beta-glucan) family in which there are several forms with different scientific names depending on the species of mushroom: schizophyllan, lentinan, grifolan, PSP (polysaccharide–peptide), and PSK (polysaccharide–krestin).

2. Benefits for the immune system

Mushrooms as immune modulators
As mentioned, mushrooms owe their health virtues to their exceptional composition. As shown by several studies conducted on the immune-modulatory effects of mushrooms1,3,4, certain of their bioactive components appear to have a positive effect on the immune system, stimulating the body’s natural defences. According to this research, certain polysaccharides present in mushrooms are able to directly or indirectly stimulate several immune cells: T and B lymphocytes, Natural Killer cells, neutrophils and macrophages. This involves cell receptors known for their role in the immune response, such as dectin-1 and TLR2. By binding to these receptors, the β-glucans in mushrooms exert various effects on the immune system. Scientists are now working to establish the specific role played by each type of mushroom in the immune response. This could pave the way for personalised treatments to stimulate the body’s own defence mechanisms. In addition, polysaccharides’ immune-modulatory action gives them an anti-tumour effect. Suffice to say then, that there is more to be revealed about the health benefits of mushrooms!

The anti-inflammatory role of mushrooms
In 2014, a study was published in the journal Food Chemistry5 on mushrooms’ anti-inflammatory effects. It seems that mushrooms could indeed represent a natural alternative for treating inflammation, the increasing incidence of which in recent years makes this research all the more significant. In order to evaluate the anti-inflammatory potential of mushrooms, the researchers in this study analysed several species, including button (Agaricus bisporus), shiitake (Lentinus edodes), enoki (Flammulina velutipes), and oyster mushrooms (Pleurotus ostreatus). Each was tested using several measures including inhibition of nitric oxide production and TNF-α. The researchers found that potent anti-inflammatory activity appeared to be strongest in the shiitake, enoki and oyster mushrooms. While further studies are needed to confirm these results, this research is nonetheless encouraging and opens the way for the development of mushroom-based anti-inflammatory treatments. Indeed, certain mushrooms are already available in dietary supplement form, offering a high concentration of active principles. Consumers can thus now benefit from the properties of shiitake and button mushrooms.

Several possible medicinal applications
The numerous studies conducted on mushrooms in recent years have laid the foundations for multiple therapeutic applications. We have already mentioned their anti-inflammatory role, but the use of mushrooms could also be indicated in other contexts. Indeed, the antioxidant potency of some mushrooms could prove of significant benefit in reducing free radical damage and thus fighting cellular ageing. One recent study focused on mushrooms’ therapeutic potential in the area of neurodegenerative diseases. 2. The results were very encouraging. They revealed an unexpected effect from mushrooms on brain cells, a discovery that could constitute a major advance, especially since incidence of neurodegenerative diseases and dementia has been rising exponentially in recent years. Alzheimer’s is the most common such disease – it is estimated that by 2020, 42 million people across the world could be affected. Unfortunately, current treatments remain ineffective and research is thus gathering pace to try and prevent and reduce the symptoms of neurodegenerative diseases. Could mushrooms constitute an effective and natural option? This was the suggestion of a new study published in 2017 in the Journal of Medicinal Food2.

The use of reishi for combatting degeneration of neurons
In this study, researchers focused on reishi (Ganoderma lucidum), a species of mushroom used for hundreds of years in traditional Chinese and Japanese medicine. Demonstrating a beneficial effect on the brain, their results showed that reishi extracts may protect synapses, the structures involved in nerve impulse transmission between two neurons. This protective effect could be due to a reduction in synaptotoxicity and death of nerve cells induced by beta-amyloid plaques, a process known to occur particularly in Alzheimer’s disease. Other results suggested reishi could be associated with a reduction in beta-amyloid in the brain as well as increased antioxidant activity. Again, further studies are needed to corroborate these findings but these early results provide new hope for patients and their families. While we await the publication of additional data, reishi is already available for preventive purposes in dietary supplement form. 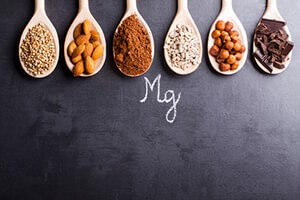 Magnesium: a new anti-inflammatory?
Magnesium has until now been mainly known as an essential mineral for nervous system balance, cardiovascular regulation, muscle function and bone health. Now it seems...
Read more
Follow us